I went to the pornathon film festival last night; stayed for the first and second set of films, which were punctuated by Venus DeMidol & Jewel of Denial’s, of Velvet Hammer fame, sultry feather plume performance. 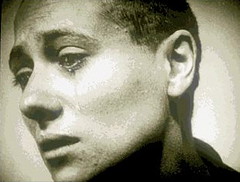 I watched the first set, films from europe between 1912-1935, with some interest, and was reassured to see that the money shot was always an important part of the visual narrative. Lost interest early into the second set during behind the green door, then deep throat began and I realized that I knew the cinematographer, Giovanni, who was also the uncredited director of photography for The In Crowd. I fondly recalled how he always let me intern with the camera dept. on days I was not required in scenes. He really took the time at least one set up a day to talk me through the lighting and let me see the framing through the camera. Invariably, as we were sweltering through a Pennsylvania summer, he would ask me if I had ever seen how a beautiful woman looks as she sweats. I would always shake my head and ask him what he meant, his eyes would focus on a faraway spot and he would begin to describe how they glow, literally, they glow for about three seconds before the beads of sweat form on their skin. It was only later in the shot, as my dinners with the camera dept. became more frequent, that giovanni revealed to me that he had shot Deep Throat, and I believe “Behind The Green Door”, in addition to many other adult films whose titles I recognized, but could not retain.

I owe a great deal to Giovanni, in addition to a wonderful cinemagraphic apprenticeship, he also introduced me to Yuca’s Hut on Hillhurst.

As Harry Reems began to gesture obscenely to Linda Lovelace my interest piqued, soon the entire audience, myself included, was absorbed in watching Linda deep-throat him. This sequence, which must last at least a minute, was strangely cathartic; I attribute this unexpected response not to just the venue, their really is something to sitting in a darkened room with 40 other people, but the power of the scene itself. This infamous scene stood in marked contrast to the other films. Granted, Linda does have an impressively large schmuck piled down her throat, but it is not the lasciviousness of the shot that gives it such power, but rather Linda’s face. There is in this scene, a real connection with Linda, and it is through her face; her face which conveys so much emotion.

My mind immediately went to Dreyer’s , The Passion Of Joan Of Arc, the pathos, the power of that film which is essentially a series of close-ups, moist with the tears, as Ren?