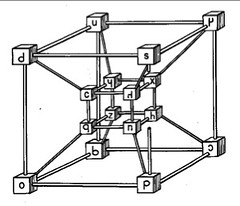 Another fascinating article from the Institute of Figuring
journal, Cabinet, in which the geometric logic system of Shea Zellweger is explicated and laid bare. based on geometry, rather then an algebraic system—Boole’s algebra the seminal work in that cannon, Zellewegar’s system is an exploration into the fascinating group of symmetrical patterns which make up his Logic Alphabet which has 16 logical connectives—First Order Logic has four.

Zellweger explains that he created his alphabet to change the way logic is taught today, which he claims is a system of purely abstract signs that only college-level students can understand. He continues, “The Froebel-Montessori method of acquainting children first with fundamental patterns, and then later putting letters and other symbols on to these to show how the same forms are embodied in natural phenomena and geometric figures is exactly right. I