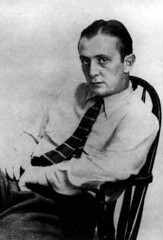 Before Kerouac, before Bukowski, there was John Fante, author of “Ask the Dust,” “Dreams of Bunker Hill,” “Full of Life,” “The Road to Los Angeles” and “Wait Until Spring, Bandini.” This five-novel cycle, written over sixty years, introduced the world to Arturo Bandini, an outspoken, down-and-out Mr. Hyde to Fante’s Dr. Jekyll.

As Bunker Hill’s prodigal son, Fante-as-Bandini chronicles a forgotten Los Angeles neighborhood teeming with immigrants, criminals and dreamers like himself. With genuine compassion and wonderful craft, he sketches the hopes and dreams which fly round their heads, and in the process finds his own voice, a revelation which carries him all the way to Hollywood. Once there, he is distracted by fame and fortune, and settles for easy answers to the questions of faith in oneself, the nature of inspiration, and the duality of failure and redemption. “Dreams of Bunker Hill” was dictated by a blind Fante two years before his death, and “Road to Los Angeles” was published posthumously.

Bunker Hill is gone now, flattened, its mansions torn down, long since redeveloped by corporate and civic interests. But in today’s downtown communities the same stories play out, in thriving micro-climates where artists and writers find their voices, where some are making it big and others breaking up on the reef, some moving away and others coming back in search of what they have lost.

Arturo Bandini is alive and well, and his lament is as relevant today as it was 75 years ago. So please join us as we follow in his footsteps, to the Goodwill store, King Eddy’s, Clifton’s Cafeteria (“pay what you can”), the Los Angeles Library’s Reading Room and the Post Office Terminal Annex (important landmarks for Bukowski and Fante), and other evocative scenes of old L.A.

Along the way, we’ll visit the scenes of some of the most horrible and peculiar crimes and accidents to befall the denizens of Bunker Hill and surrounding neighborhoods, and invite their ghosts to join us on our time travelers’ jaunt between the 20th and 21st centuries.

Please Note: The middle section of this five-hour tour includes a walk lasting approximately 60 minutes through parts of Downtown. There are no hills, and the pace will be ambling, but walking shoes and sunscreen are advised. Passengers may stay on the bus and watch relevant documentaries if they don’t wish to walk.