BUSBOY DURING DAY, AT NIGHT HE’S AN AUTHOR

Youth, 22, Would Rather Be Good Dish Carrier Than Bad Writer; First Novel Sold 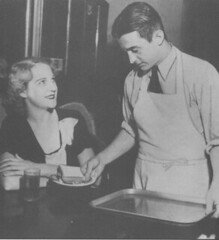 By day he juggles dishes, a briskly efficient bus boy. By night he burns the midnight oil weaving words into patterns that win the praise of literary connoisseurs. And it’s all the same to John Fante, 22-year old Italian-American, whether or not he stays a busboy as long as he can write.

Money means nothing he declared yesterday-and achievement means everything.

His first novel, Mater Dolorosa, is nearly completed. He sold it from a synopsis to Alfred A. Knopf the publisher. Six of Fante’s terse vivid stories have appeared in that criterion of meritorious wordage, the American Mercury.

“So what?” asks Fante. “I’m no literary lion. i’ve got to eat, checks and royalties don’t grow on trees and I don’t care much about them anyway.”

“I’d rather be known in the barbecue lunch room as a bus boy who knows his dishes than be a hack writer turning out potboilers. ”

Besides carrying dishes and filling in as a waiter at the lunch room, 328 West 3rd ST., Fante acts as an editorial assistant to Jean de Kolly, author’s agent.

“I don’t think I’m a genius,” he declared. “I’m just a hard working craftsman. I’m seeing a lot of life, trying to write simply and graphically, and trying to justify the faith in me evinced by H.L. Menchken and Carey McWilliams, the Los Angeles writer who urged me to go ahead even after reading my first efforts.”

Fante has been writing less then a year. He is a graduate of Regis High School Denver, and had two years at the University of Colorado.

“But I do believe,” he declared, “a busboy learns as much as a college student. ”