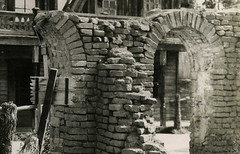 March 1891- An old neighborhood ghost story from Sonora Town is introduced to a wider audience when the Times reports on the fright suffered over several
nights by Police Officers Valencia and Stewart near Alpine and Buena
Vista (a vanished street near Broadway today). A very long haired
woman in a long black dress appeared from the ruins of the Sanchez
adobe (abandoned for 90 years) at 12:30 nightly and paces along the
road, vanishing when one of the officers gets close. Officer Valencia
even shot at the figure, but struck nothing, and his dog ran away from
the site in terror. A search by neighbors found no one hiding in the
ruins.

Old timers have come forward to say the ghost has been seen for many
years in early spring, and is known for pulling her long hair around
herself before vanishing. Supposedly, she was the daughter of a
wealthy family of the early 19th century who wanted to marry below her
station, to a musician. Her parents locked her in her room, and she
withered away from misery. An old neighbor lady came to comfort her,
and heard the girl curse her family with her last breath, that none of
them would rest easy in her grave until she was avenged. Indeed, bad
luck and terrifying visitations plagued the family, they lost their
property and moved away—but the girl remained. Now that her family is
gone, she is known to lurk around sickrooms and follow sick people’s
friends to the drug store or doctor’s office.