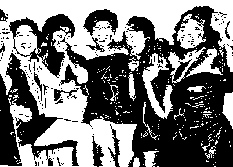 The French Quarter 1939. Black pepper was a penny a pound, silk shirts cost fifty cents, poorboys were as long as your arm, and five will get ya’ ten that Lizzie’s got a spare room.

Aunt Lizzie was a seminal figure in Billie’s life, she turned Billie out at the age of 11, claiming she needed help around the house. When his mother finally confronted her sister, she merely replied that she wanted him to get “hep” to what the world was.

Working out of her shotgun house in the French Quarter at the eve of WW II, Billie learned the ropes from a woman who would insist that the butcher take 5 cents off her bill everytime he put his hand up under her skirt.

Whatever her intentions, after a few years under Lizzie’s wing, Billie was ready to fly the coop.