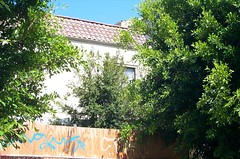 The window from which Fante wrote Ask The Dust.

His neighbor, Cassandra, poet and friend to man and besat alike, like her compatriot across the street. She notes that she still catches the old goat staring at her ass from out of his window.

2 weeks ago the police were called when a body was discovered in the abandoned building. A woman from El Salvador. Her lover can not access her storage locker, and has no way to contact her children (all their contact information is there). Since then the LAPD has apparently sought to have the buiding condemned. They are tired of coming out to follow up on calls related to the vagrancy there. 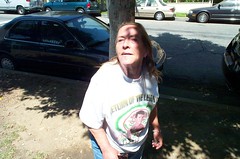 Cassandra waxed philosophical about the couple who lived in the Fante apartment for about ten years, the last official occupants of that apartment. The wife had Tubercolosis, when they moved away Cassandra suspects she died soon after that. Then there was the family who lived in the back, the unit where the Fante’s lived when they returned to 826 S Berendo. They had children and dogs, and both loved to run up and down the back part of the building patio/courtyard. The tubercular neighbor did not like the noise, but Cassandra advised her to live and let live.

Was interviewed by Frances Anderton for KCRW’S DnA about the building. It will air week after next, Tuesday, June 19th. Fante is an important novelist for Anderton, and a big influence on her decision to come to Los Angeles.